America’s Greatness: It Has Never Really Been Politics

Everywhere I go, I am surprised how much people all over the world know about the U.S.
• When I was in Russia a couple weeks ago, a young man came up to me and asked me if I was from the US.

Then he began to ask me all kinds of questions about the housing market and sub-prime loan crisis. He wanted to know when I thought the market was going to recover, and what the relationship was going to be between the stock market and the upcoming elections.
• When I was in France, a woman who was originally from Scotland but now living in Norway taught me some interesting things I didn’t know about the current US presidential political candidates.
• When I was in China, a few people talked to me about wanting to move to the U.S., one man describing to me the uniqueness of some of the freedoms we have.
• When I was in Finland, I heard a black man from Tanzania defend the current situation in America to a white woman from South Africa who was speaking against certain parts of it.

I know other countries are talked about (e.g. French president’s new wife, Spain wining the Euro 2008, Russia’s and Putin, Zimbabwe’s election scandal…) but the situation in the US seems to command so much of the discussion of ordinary people around the world. To be honest, sometimes the discussion has made me feel somewhat awkward to be from the US, and at other times it has made me feel some degree of pride – but always it makes me think what a big responsibility it is to be the focal point of so much discussion.

leader, but how the greatness of America was never found in Washington DC or any of its politicians.
He talked about how in America we all now have been bombarded with talk and recognition of all of the problems and all of the dangers we face – and now the whole world knows all our problems. We often talk so much about the problems we currently face, that we totally miss the blessings and opportunities that we so easily take for grant it. So what is it that contributes to the ways in which America is great?

There has been a lot of new technologies and innovations which have come from America:

But this is not really what he thought makes America great.

Where is the greatness?

From his message, at least part of greatness of America is captured in two phrases:
1. “We the People” – the first three words on the Declaration of Independence – in large print. This is the belief that government does not solve our problems, but we solve them by serving our families and communities. Glenn Beck said: “We can solve any problem. Not in Washington, but right here. The answer never comes from Washington, it never has… The answer comes like a beacon in these three words – ‘We the People’”
2. “In God we Trust” – this phrase should bring humility, not arrogance. It is the belief that if we humble ourselves and trust in God, He can guide us into an uncertain and difficult future to do things that will benefit ourselves and those we care about (both in and out of the country).

George Washington, the first president, was a good example of this –

not looking for power of government position, not interested in being a politician, but simply in doing his duty to serve for the sake of freedom. Glenn Beck pointed out that when George Washington was making his stance at Valley Forge during the war of independence, he was just a short way from the government capitol (which at that time was Philadelphia). During the cold winters, his wife was the one who made shirts and pants for the soldiers. “The government and congress did not do much to help them then. The situation has not changed that much today.”

____
As a strange side note, one of the news stories in the U.S. this year is that the fireworks displays tonight might 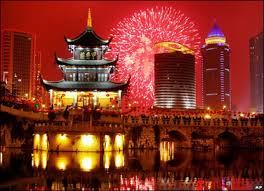 not be as spectacular this year because it was more difficult to get fireworks from China due to the recent earthquake.

So even in talking about the positive aspects of American society, I can not get beyond the reality of how interconnected the world is now-a-days.

Since we are so interconnected, I’m curious – from an international perspective what do you think have been some of the positive and negative impacts America has made on the world?